The Latest Foreign Publication of the Research Group 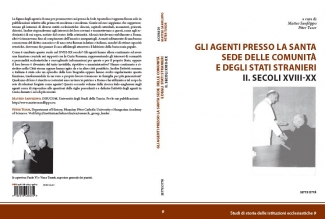 The operational framework of the agents in Rome, who represented certain local churches, national communities, namely the representatives in the 19–20th century is less explored than that of their colleagues’ work in the 16–18th century. It is encouraging to note that more and more researchers deal with the interesting yet challenging unfolding of this role’s nature. The Fraknói Research Group organised a grandiose academical session, “The Agents of Foreign Communities and European-American States in Rome”, in Budapest, in the palace of the Hungarian Academy of Sciences already in September 2018. Later on, the lecturers analysed the actions of the agents in the 15–18th century, and then in 2019 they turned their attention to the 19–20th century on another international conference where Italian, Austrian and Hungarian academics were at present in the Eternal City. The even took place in the vintage Instituto Nazionale di Studi Romani, which used to be the residence of the Sacred Congregation for Bishops and Regulars until the existence of the Papal State. The symposium was organized in the framework of an international cooperation by the Faculty of Humanities of the University of Viterbo (Università della Tuscia, DISUCOM) along with the Instituto Nazionale di Studi Romani, the Roman Centro Studi Emigrazione and the MTE-PPKE Vilmos Fraknói Vatican Historical Research Group.

The volume of studies containing the lectures of the successful event has been published lately as the 9th volume of the “Studi de storia delle instituzioni ecclesiastiche” series, edited by Péter Tusor and Matteo Sanfilippo in the Edizioni Sette Città of Viterbo. The volume of studies containing ten essays in Italian and in English besides the foreword of the editors examines this topic. This volume is the fifth publication of the Fraknói Research Group that was published in the framework of an international cooperation at a prestigious foreign publisher.