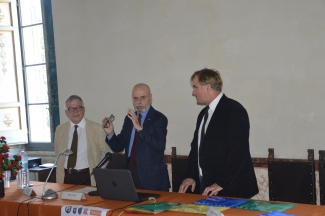 Last year Fraknói Research Group held an international conference in Budapest entitled ’The Agents of Foreign Communities and European-American States in Rome’. The conference focused on agents between 15th-18th centuries. This year the second part of the conference which payed attention to the 19th and 20th centuries was hold in Rome in the headquarters of the Istituto di Studi Romani. The event powered by Università della Tuscia DISUCOM, Istituto Nazionale di Studi Romani, the roman Centro Studi Emigrazione as well as MTA-PPKE Vilmos Fraknói Vatican Historical Research Group.
As a pursuance of the main thesis the role of the foreign agents in Rome was analogue in the 19th and 20th centuries as in earlier times.
For the international conference lecturer came from Italy, Austria and Hungary too, namely Alessandro Boccolini, Andreas Gottsmann, Oliver Panichi, Matteo Sanfilippo, Gaetano Platania, Francesca de Carpio, Krisztina Tóth, Balázs Rétfalvi and Péter Tusor.
Every lecture will be available until the end of October on the Researcher Group’s Youtube channel.
According to plans the lectures will be published as a volume of studies editing by Matteo Sanfilippo and Péter Tusor.