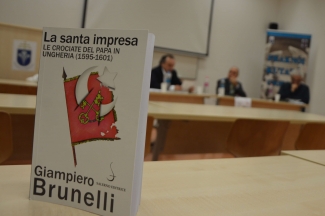 In his introduction, Giampiero Brunelli mentioned the phenomenon what Hungary meant in the end of the 16th century for Europe. He pointed out that the pope and the leaders of the time all realised that the border of Europe goes through Hungary, and all of their military campaigns to protect the culture of Christianity necessarily focused on Hungary as well.

The author was followed by Tamás Kruppa, senior research fellow of the research group. He praised the book and he stated that this volume counts as a big step towards the research of the era, and previous historians haven't payed enough attention towards the military politics of the Holy See.

Márton Szovák correlated his findings from Italian archives through the Vestigia-project with the new volume, reviewing the letters of Ercole Torbidi.

In his closing words Péter Tusor, leader of the Fraknói Research Group, underlined the importance of the foreign scientific results concerning Hungarian history, and he also stated it's crucial that the research group contributes greatly in this matter.

Review of the book in Corriere Della Sera