The Formularium Ecclesiae Strigoniensis at the Hungarian Academy of Sciences 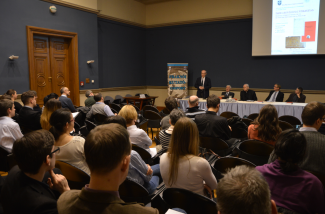 Not long after the event in Rome, the research group presented it's newest volume at the Hungarian Academy of Sciences on 13 December 2018.

The "Formularium Ecclesiae Strigoniensis" publishes two codices from the early 16th century, the Beneéthy and the Nyásy-codex, one of the most important ecclesiastical law handbooks of the era from the Archidiocese of Esztergom.

Péter Tusor, leader of the Fraknói Research Group, welcomed the audience and gave an insight to the process and circumstances which were necessary for the volume to be published, such as the Church History Research Group established by cardinal Péter Erdő in 1999.

László Solymosi, full member of the Hungarian Academy of Sciences, praised the volume and gave details about the formulary books in Hungary.

Norbert C. Tóth, senior research fellow of the Hungarian Medieval Research Group (MTA-HIM-SZTE-MOL) stated that the formulary is a lot more than it would first seem to us, due to the fact that it consists not just texts related to the ecclesiastical jurisdiction in Esztergom, but private material of archbishop Tamás Bakóc as well. He also described the scale of the work done by Kornél Szovák enormous.

Cardinal Péter Erdő discussed the relations of the book with the canon law. He also tried to answer the question what was the reason behind the creation of the second variant of the already usable Beneéthy-codex in Esztergom.

Finally, Kornél Szovák explained the process and methodology he used for the work, and also raised the question about the theoretical quantity of sources which remained from the Middle Ages for the present day. Pál Engel previously stated that approximately 2% of the original number of documents remained to us, but this new formulary could bring up the assumption that this could be even lower (1 or even 0,5%), claimed Szovák.