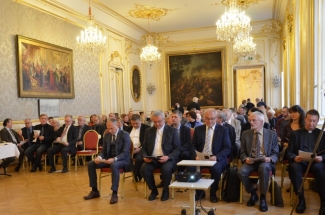 After Budapest and Rome on 20th of October 2021 last time in Vienna at the Embassy of Hungary Bischofslexikon was presented. Large number of attendees appeared in the headquarters of the Hungarian Embassy. The Hungarian Ambassador to Austria, the Dean of Theology Faculty of Vienna and Secretary of Episcopal Conference of Austria gave opening speeches. Thereafter former director of Institut für Össterreichische Geschitsforschung Prof. Thomas Winkelbauer presented the volume. Then Rupert Klieber and Péter Tusor described how they have organized this project through a decade. At the end of the happening S.E.R. András Veres, President of the Episcopal Conference of Hungary and Bishop of Győr, gave a closing speech.

Péter Tusor's remarks is available on the link.